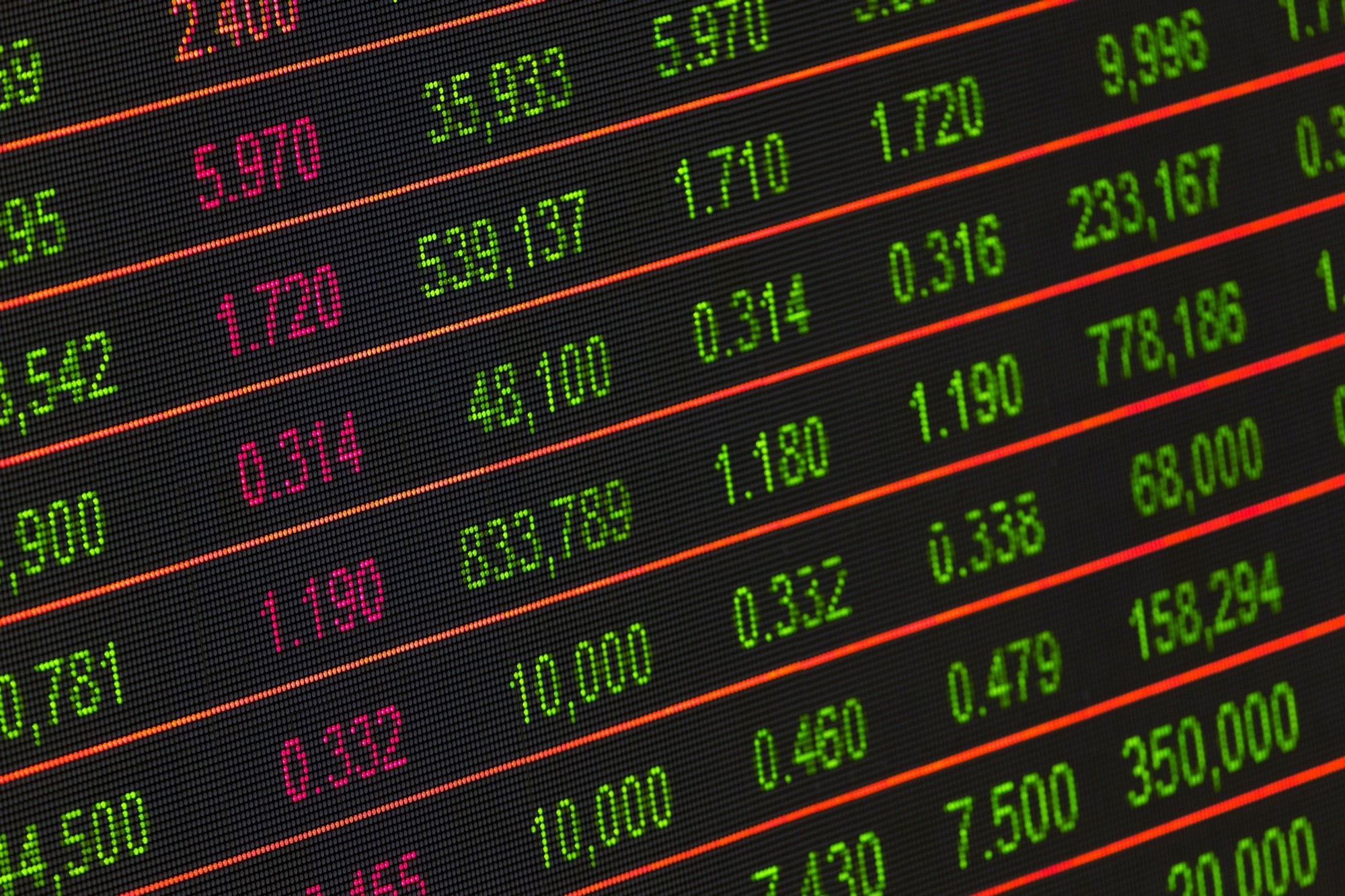 This blog post is on simulating fake data. I'm interested in creating synthetic versions of real datasets. For example if the data is too sensitive to be shared, or we only have summary statistics available (for example tables from a published research paper).

If we want to mimic an existing dataset, it is desirable to

In addition, it would be nice if such functionality is available in a standard R package. After reviewing several R packages that can simulate data, I picked the simstudy package as most promising to explore in more detail. simstudy is created by Keith Goldfeld from New York University.

In this blog post, I explain how simstudy is able to generate correlated variables, having either continuous or binary values. Along the way, we learn about fancy statistical slang such as copula's and tetrachoric correlations. It turns out there is a close connection with psychometrics, which we'll briefly discuss.

Copulas are a fancy word for correlated ("coupled") variables that each have a uniform distribution between 0 and 1.

The workhorse for our simulated data is a function to simulate multivariate normal data. We'll use the MASS package function mvrnorm(). Other slightly faster (factor 3-4) implementations exist, see e.g. mvnfast.

The trick is to first generate multivariate normal data with the required correlation structure, with mean 0 and standard deviation 1. This gives us correlated data, where each variable is marginally (by itself) normal distributed.

Here I simulate two variables, but the same procedure holds for N variables. The Pearson correlation is set at 0.7.

(The diagonal of 1 makes sure the variables have SD of 1. The off diagonal value of 0.7 gives us a Pearson correlation of 0.7) 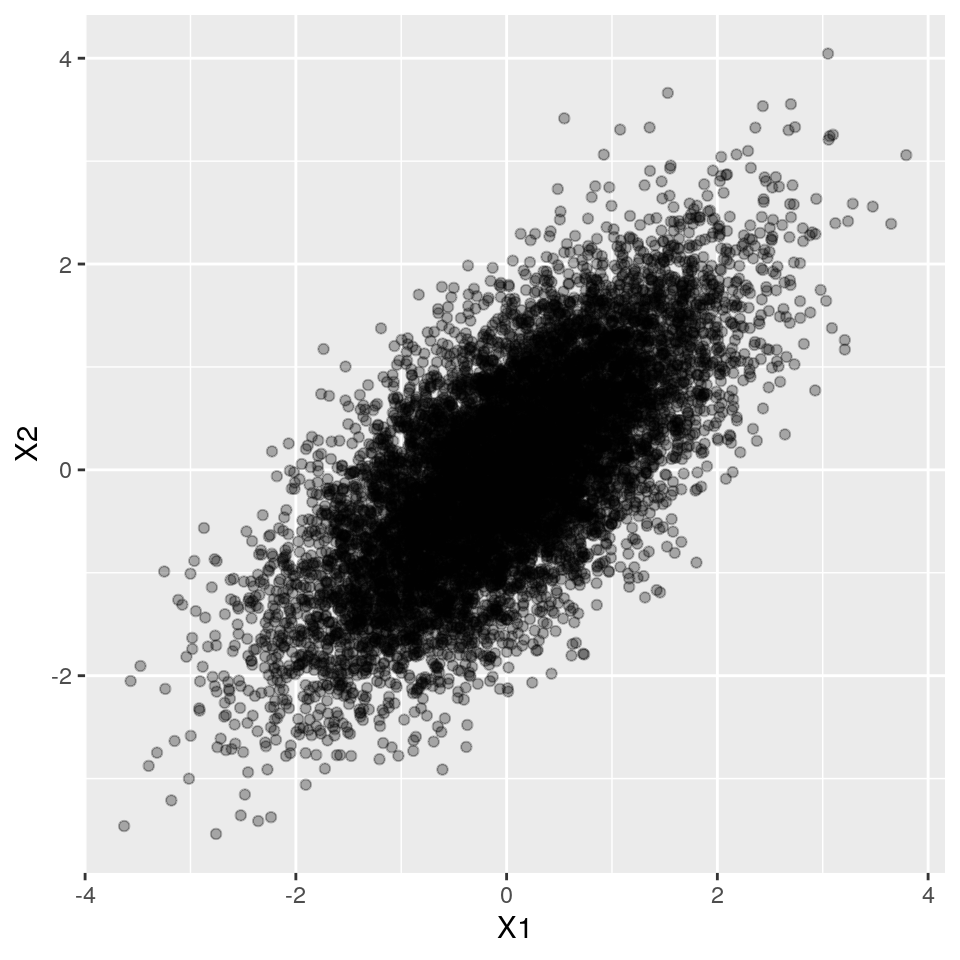 Using the normal cumulative distribution function pnorm(), we can transform our normally distributed variables to have a uniform distribution, while keeping the correlation structure intact!!!! 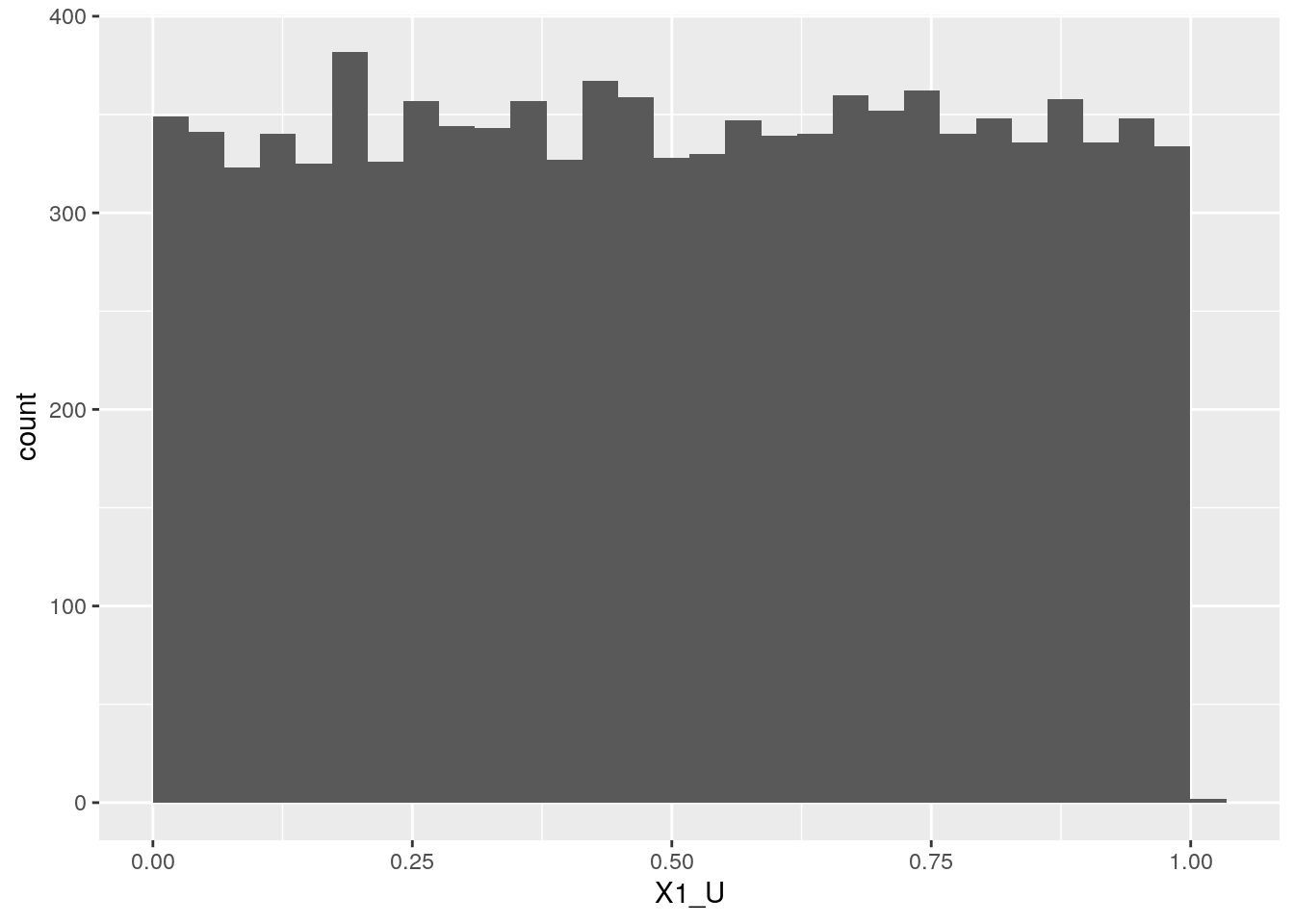 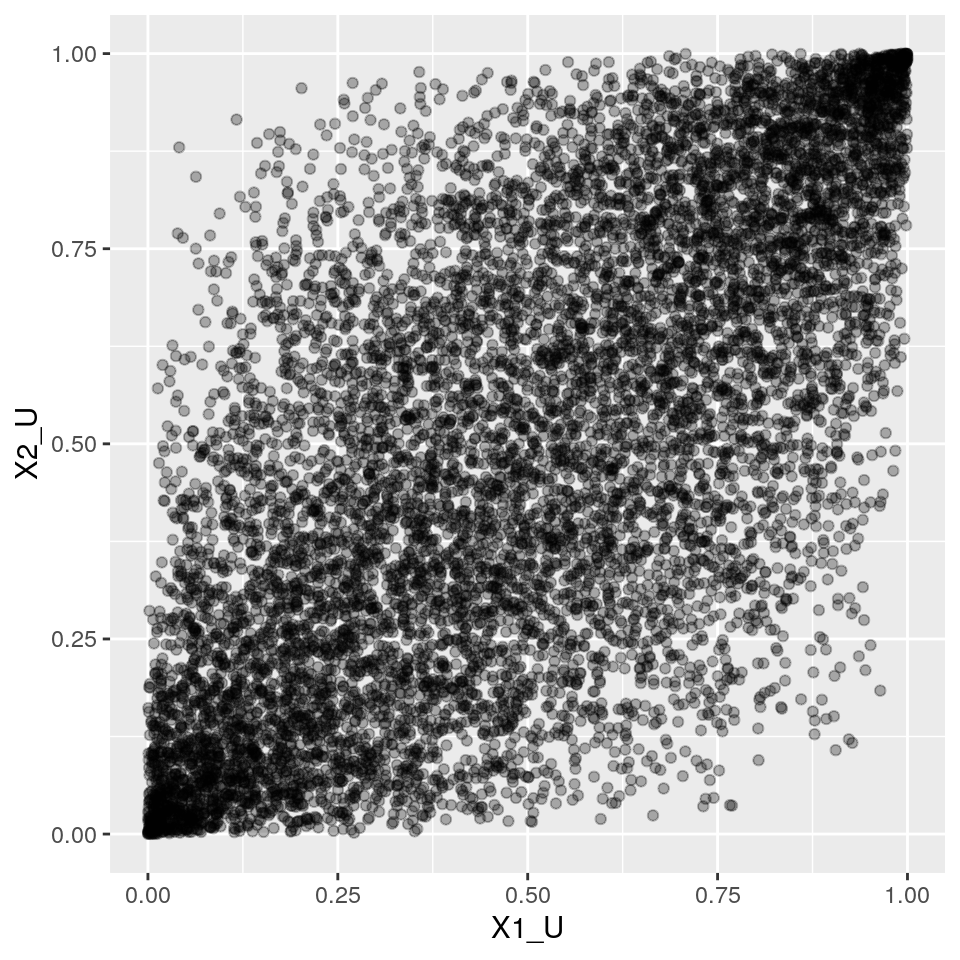 And here's our copula! Two variables, each marginally (by itself) uniform, but with pre-specified correlation intact!

Step 3: from uniform to any standard probability distribution we like

Now, if we plug in uniformly distributed data in a quantile function of any arbitrary (known) probability distribution, we can make the variables have any distribution we like. 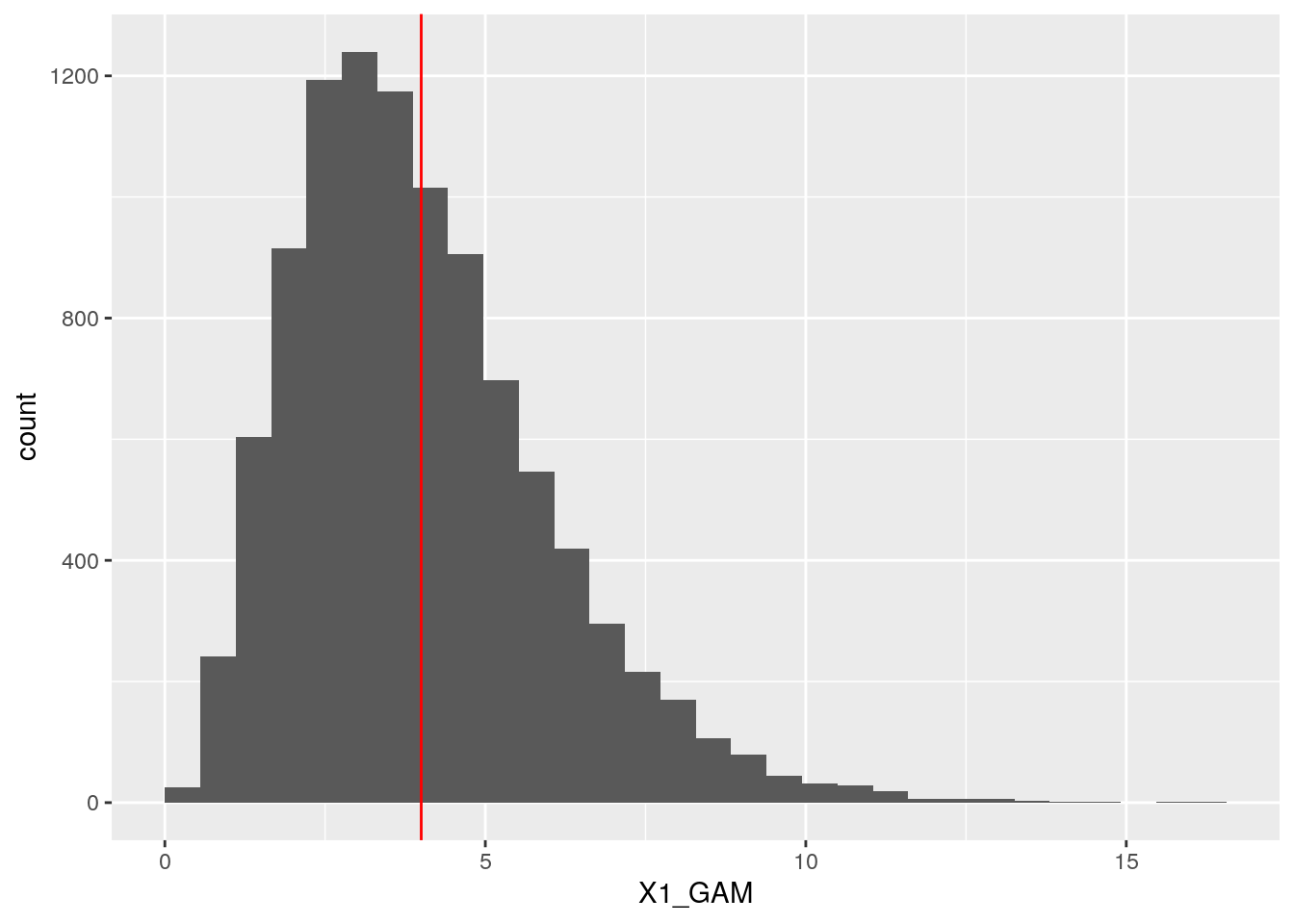 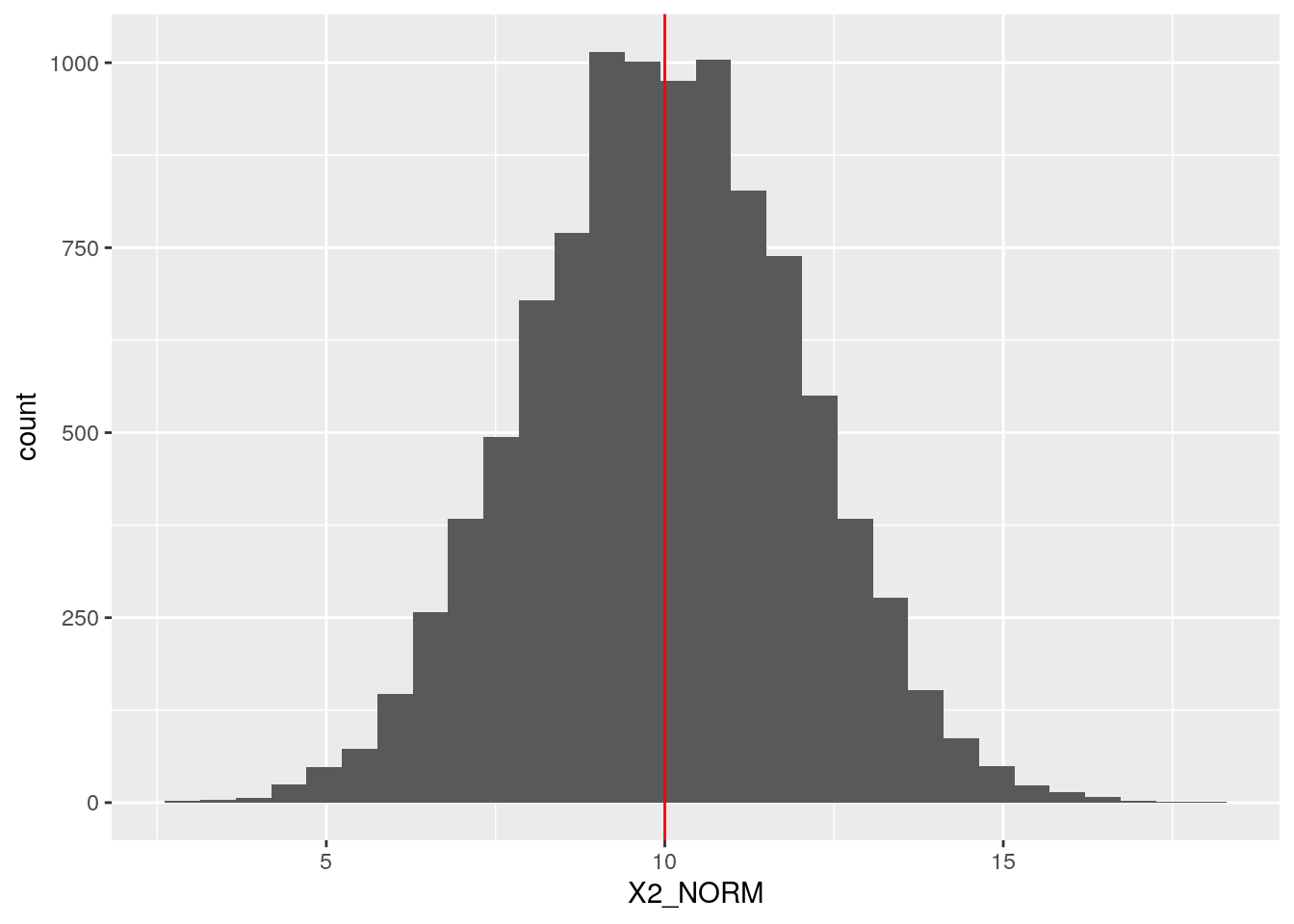 Ok, that worked nicely. But what about their correlation?

Whoa!! They still have (almost) the same correlation we started out with before all our transformation magic.

Now let's see how simstudy helps us generating this type of simulated data. Simstudy works with "definition tables" that allow us to specify, for each variable, which distribution and parameters to use, as well as the desired correlations between the variables.

After specifing a definition table, we can call one of its workhorse functions genCorFlex() to generate the data.

N.b. Simstudy uses different parameters for the Gamma distribution, compared to R's rgamma() function. Under water, it uses the gammaGetShapeRate() to transform the "mean" and "variance/ dispersion" to the more conventional "shape" and "rate" parameters. 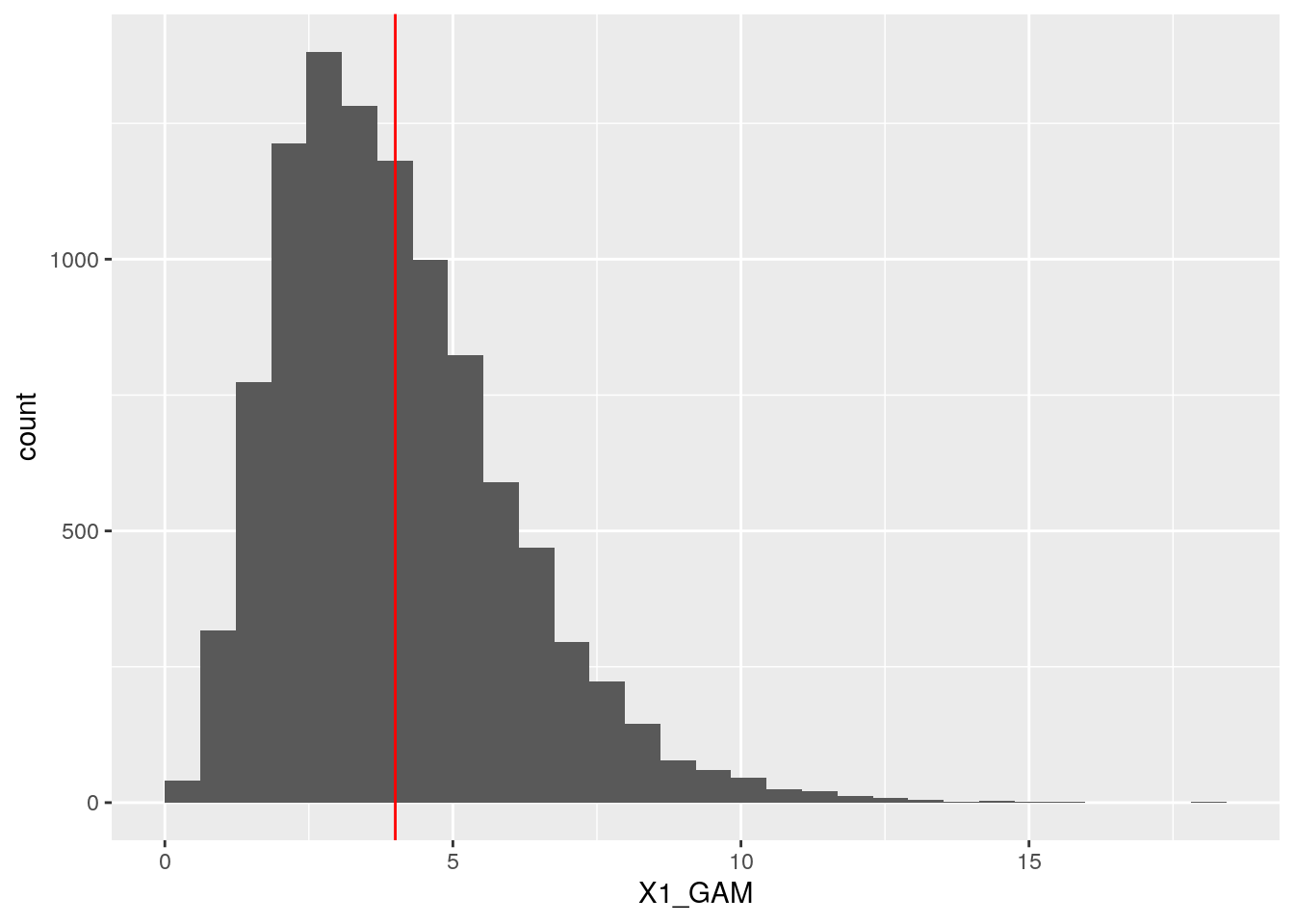 As it turns out, the copula approach does not work for binary variables. Well, it sort of works, but the correlations we get are lower than we actually specify.

Come to think of it: two binary variables cannot have all the correlations we like. To see why, check this out.

To see this, I created two binary vectors that have a fraction 0.2 and 0.8 of 1's, and let's see if we can arrange the values in both vectors in such a way that minimizes and maximizes their correlation:

In this example, we conclude that the feasible correlation range is {-1, 0.25}.

The simstudy package contains a function to check for feasible boundaries, that contains this piece of code:

This confirms our example above.

Note that if we want to mimic a real dataset with binary correlated variables, the correlations are a given, and are obviously all feasible because we obtain them from actual data.

Why? Because a) we know it very well theoretically and b) we know how to simulate efficiently from such a distribution, using mvrnorm().

This approach reduces the problem to finding the right values of three parameters: multivariate normal correlation, and the two thresholds (above, we already fixed the means and variance to zero and one respectively).

For now, we'll just pick some value for the correlation in the bivariate normal, say 0.5, and focus on where to put the threshholds.

(The diagonal of 1 makes sure the variables have SD of 1. The off diagonal value of 0.7 gives us a Pearson correlation of 0.7) 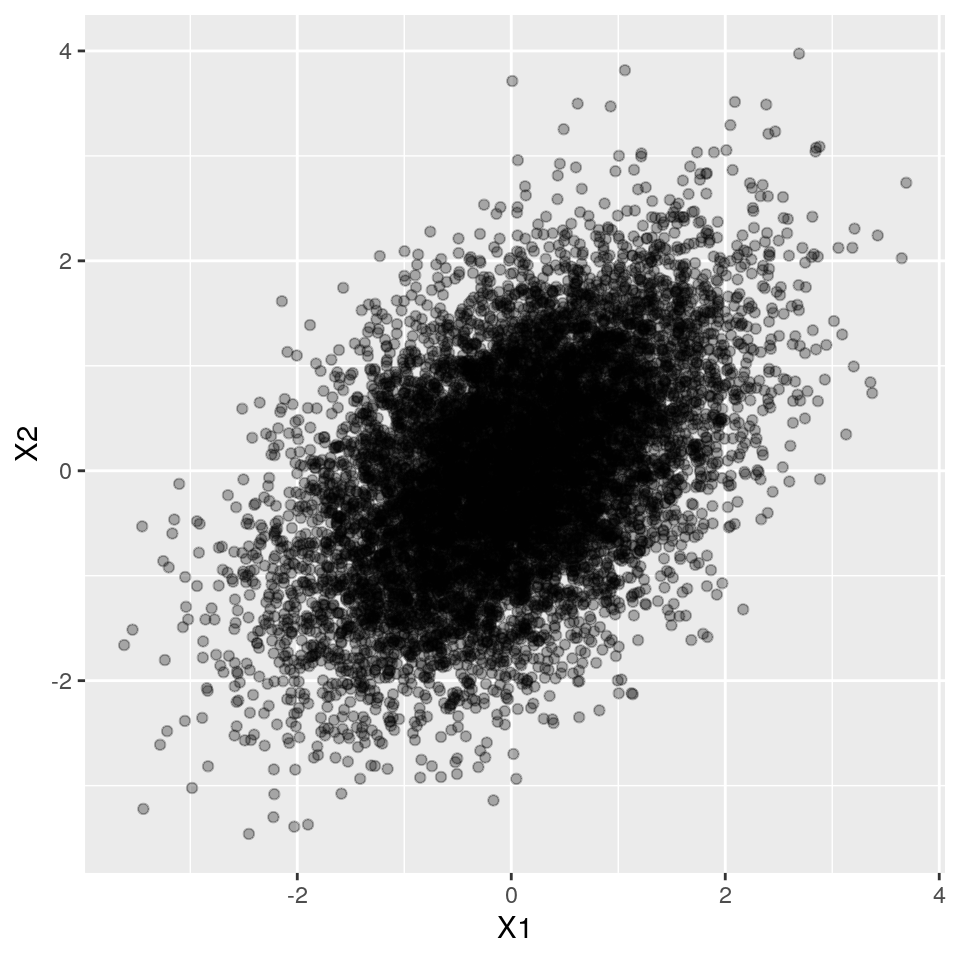 Ok, where to put the thresholds? That's simple, we just need to use the quantile distribution function to partition the marginal normal variables into 0 and 1 portions.

Let's check it out visually: 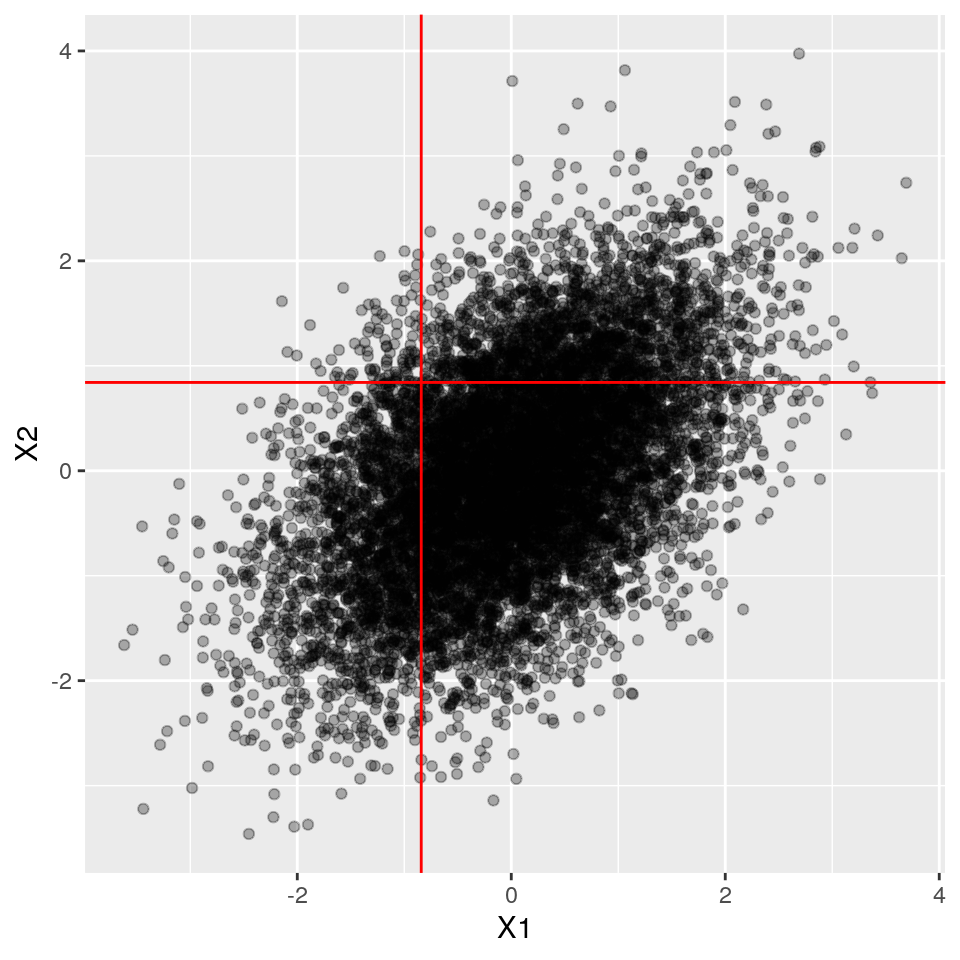 Ok, so now what is the correlation for these two binary variables?

At this point, there is only one free parameter left, the correlation of the normally distributed variables X1 and X2.

We could of course manually try to find which correlation we must choose between X1 and X2 to get the desired correlation of 0.1 in the binary variables. But that would be very unpractical.

Fortunately, Emrich and Piedmonte (1991) published an iterative method to solve this puzzle. And this method has been implemented in simstudy.

Let's see if it works:

So what has psychometrics to do with all this simulation of correlated binary vector stuff?

Well, psychometrics is all about theorizing about unobserved, latent, imaginary "constructs", such as attitude, general intelligence or a personality trait. To measure these constructs, questionnaires are used. The questions are called items.

Now imagine a situation where we are interested in a particular construct, say general intelligence, and we design two questions to measure (hope to learn more about) the construct. Furthermore, assume that one question is more difficult than the other question. The answers to both questions can either be wrong or right.

We can model this by assuming that the (imaginary) variable "intelligence" of each respondent is located on a two-dimensional plane, with the distribution of the respondents determined by a bivariate normal distribution. Dividing this plane into four quadrants then gives us the measurable answers (right or wrong) to both questions. Learning the answers to both questions then gives us an approximate location of a respondent on our "intelligence" plane!

Officially, the Pearson correlation between two binary vectors is called the Phi coefficient. This name was actually chosen by Karl Pearson himself.

The psych packages contains a set of convenient functions for calculating Phi coefficients from empirical two by two tables (of two binary vectors), and finding the corresponding Pearson coefficient for the 2d (latent) normal. This coefficient is called the tetrachoric correlation. Again a fine archaic slang word for again a basic concept.

Comparing with the Emrich and Piedmonte method, we find that they give identical answers. Great, case closed!

Now that we feel confident in our methods and assumptions, let's see simstudy in action.

Let's generate two binary variables, that have marginals of 20% and 80% respectively, and a Pearson correlation coefficient of 0.1.

Recall, my motivation for simulating fake data with particular variable types and correlation structure is to mimic real datasets.

So are we there yet? Well, we made some progress. We now can handle correlated continuous data, as well as correlated binary data.

But we need to solve two more problems:

Judging from the literature (Amatya & Demirtas 2016) and packages such as SimMultiCorrData by Allison Fialkowski, these are both solved, and I only need to learn about them! So, to be continued. 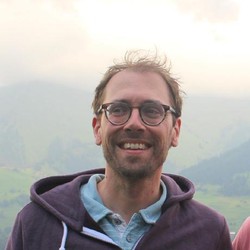 Gertjan Verhoeven is a research scientist currently at the Dutch Healthcare Authority, working on health policy and statistical methods. Follow me on Twitter or Mastodon to receive updates on new blog posts. Statistics posts using R are featured on R-Bloggers.